I help institutions and individuals organize, understand, and share observations and ideas about places; to understand how places work in their context; so that people can more effectively collaborate, make more informed decisions, and appreciate the quality of places as they are, as they were, as they change or may be changed. I have trademarked a short phrase that captures this mission: cultivating spatial intelligence. Lets take observations and ideas from multiple points of view and make them stick together in useful ways!

pbcGIS was invited to make a presentation to the Virtual Workshops on City Data Models sponsored by ISO/IEC JTC1 WG 11 on Smart Cities and the University of Toronto School of Cities.

Our collaboration with Cambridge Historical Commission is now named C-DASH (Cambridge Digital Architectural Survey and History) is creating a geo-referenced web searchable archive for 16,000 folders of historical information about each and every Cambridge building. 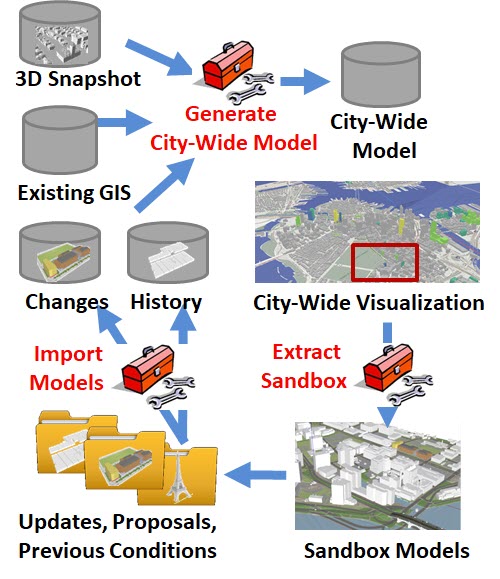 Boston Planning and Development Agency launched its city-wide 3d model. pbcGIS developed this model from various sources, and developed turn-key workflows for managing a collection of models for every building in the city, including historic buildings that don't exist any more through buildings that have been proposed, approved, rejected and undr-construction. pbcGIS also developed the tools for tiling the cyty-wide model into 1-kilometer square sketchup models that include detailed terrain, groundp-plan and buildings. This is very similar to the set-up we made for Cambridge, last year. Tomorrow the world!

The big idea behind these city-modeling projects is to provide a smoother interface between the world of urban design and development with the data-management culture of municipal GIS. When this succeeds, designers and planners in quickly-developing areas like Boston and Cambridge will have a common-operating-picture of the near-future city that includes projects that are in the design-review pipeline.

Selected Publications and Presentations on City Modeling and Information Architecture